How does stomach cancer occur?

Normally, the regeneration of cells takes place in a certain order. However, in some cases, the cell may begin to grow and multiply abnormally rapidly. In this case, a mass called TUMOR occurs. Sometimes the formed mass stops growing and reproducing after it reaches a certain size. These are called benign tumors. Sometimes, growth and reproduction continues uncontrolled. Those in this group are generally known as cancer. There are approximately 1 trillion (1 000 000 000 000) cancer cells in a malignant tumor mass of 1 (one) cm in diameter. If the cancer starts to grow from a cell in the stomach, it emerges as stomach cancer. 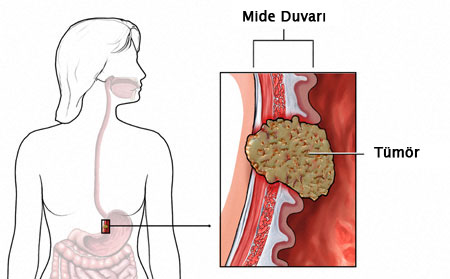 What are the symptoms of stomach cancer?

Unfortunately, 80% of them develop silently and without symptoms for a long time, that is, insidiously. Most of the time, it is caught in the early period without any symptoms, thanks to the control examinations. Sometimes it can cause ulcer or gastritis-like complaints. Complaints such as early satiety, nausea, vomiting, anorexia, weight loss, anemia, abdominal pain, bleeding (hidden or overt) or a feeling of being stuck while swallowing usually occur when the tumor reaches a certain size.

Who are more at risk for stomach cancer?

First and second degree relatives in their family, especially those who have a history of stomach cancer (genetic factors) when they are under the age of 50, some occupational groups (mining, textile, metal industry, paint, chemical, rubber, petroleum industry workers), a portion of their stomach has previously been removed Those with cellular changes such as polyps in their stomach, intestinal metaplasia, atrophic gastritis, and obese people are at higher risk.

How is the diagnosis made?

The best diagnosis method is endoscopic examination. In this way, the entire inner surface of the stomach can be imaged and also biopsy can be taken from suspicious areas. Apart from these, methods such as gastric film, endoscopic ultrasound or computed tomography can also be used. 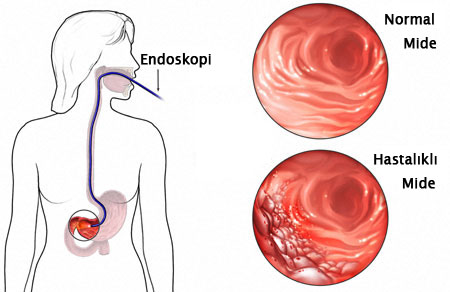 What is done in the treatment?

The primary treatment of stomach cancer is surgery. A part or all of the stomach is removed by surgical intervention. Removal of all or part of the stomach is related to the location of the stomach cancer. During the operation, the lymph nodes adjacent to the stomach are also removed and sent to the pathology laboratory for microscopic examination. When the whole stomach is removed, the starting part of the esophagus and the small intestine are stitched together to ensure continuity in the digestive system. In this case, changes will occur in the person's eating habits and frequency for a while. However, over time, the body will adapt to this situation. After the surgery, additional treatments such as radiotherapy and chemotherapy can be applied in some cases.

Is there a laparoscopic surgery option in stomach cancer?

Laparoscopic surgery can be performed in stomach cancer, especially in early stage patients. Since this surgery is performed with the help of 1 centimeter small incisions on the abdomen and with the help of a camera, it is much more comfortable for patients. Post-operative patients have less pain and recovery time is shorter.

How is the follow-up done after the treatment is over?

These patients are checked at regular intervals. Some examinations are repeated in the first two years, every 3 - 6 months, and once a year in the following period.

What can be done to prevent stomach cancer?

Of course, if there is a genetic tendency towards the disease, it is not possible to prevent it. However, the disease is not just about genetic predisposition. Therefore, it should be avoided from meats cooked at high temperatures, excessively salty foods (pickles, soy sauce, salted fish, etc.) and especially ready-to-eat foods containing many nitrate additives, instead, consumption of vegetables and fruits should be increased.

Are all stomach cancers the same?

Cancers show different characteristics in terms of many features. For this reason, the course of the disease also varies in the period before and after the operation. However, in order to understand these features and the stage of the disease, the stomach and lymph nodes removed during surgery should be examined in the pathology laboratory.

How should nutrition be after stomach surgery?

The main problems that may arise especially when the entire stomach is removed; The disorder in the digestion of fats, lactose intolerance and the so-called “dumping syndrome” that occurs after food passes suddenly into the small intestine. Inform your doctor if you have complaints such as a feeling of fullness, abdominal cramps, weakness, flushing, dizziness, diarrhea and sweating after meals. The measures that can be taken for these situations can be listed as follows: Try to chew slowly and well. Eat less and more frequently. Increase the number of meals to 6-8. Do not drink large amounts of liquid while eating. Watch out for sugary foods. Do not consume sugary foods on an empty stomach. In general, choose foods with high calorie and protein values ​​such as eggs, soft meats, fish, yoghurt, cheese, butter. Include a variety of foods in your diet gradually, as fruits, vegetables and whole grains are nutritionally important. If you have poor tolerance to fatty foods, increase their amount gradually. In some cases, ready-made food supplements may be required for extra calories.